Skip to main content
Labels
Posted by Man For All Seasons January 24, 2010

The Battle of the Little Farm

Well as promised I ran a game of 6mm WWII last night. The biggest hurdle this week was prepping the American force. Unfortunately I was not granted sufficient time to finish my entire American army but I was able to finish those figures needed for the game. In the end the Americans fielded approximately a battalion sized force of mixed infantry and armor. The game itself proved to be one of the more enjoyable and at times tense games I have played in quite some time. 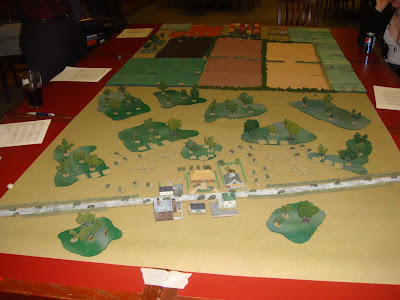 The basic scenario involved an American battlegroup clearing the left flank of an advancing division. This flank was threatened by a small German kampfgruppe, the remnants of the regiment that originally faced the division. The American objective was to destroy or rout the German force to allow the division to continue its advance through France. The German objective was to simply hold off the American battlegroup and continue to threaten the flank. 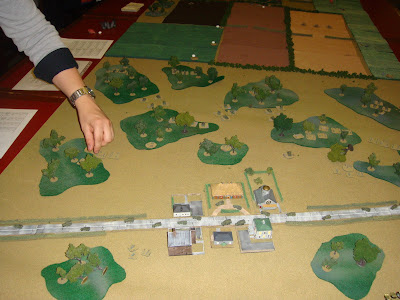 The American force consisted of two companies of infantry with limited halftrack support. These companies had bazooka, HMG and MMG teams attached. The battalion also had a company of shermans with a few 76mm armed version mixed in. The battalion also had a platoon of M10 tank destroyers, an FAO and two batteries of 81mm mortars. In addition three batteries of 105mm howitzers were available for a pre-scheduled bombardment of the German positions. 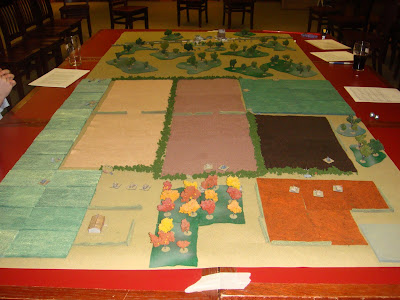 The German force consisted of two platoons of Infantry with limited transport, three MG42 teams, two Pak 40s, two Stug IIIGs, three Panzer IVJs, three Panther Ds, one Tiger, one wirbelwind and one battery of 81mm Mortars. This force took quite a beating in the initial artillery bombardment, though more to morale effects then to physical damage. When the American battlegroup made initial contact with the kampfgruppe only half the infantry remained in their positions. 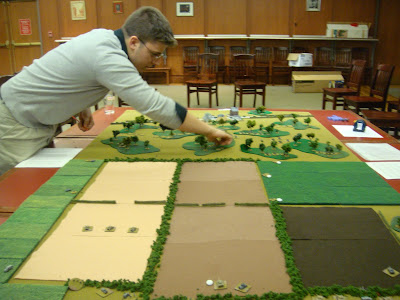 The ferocity of the initial American push had many of the spectators looking on in horror and shock. 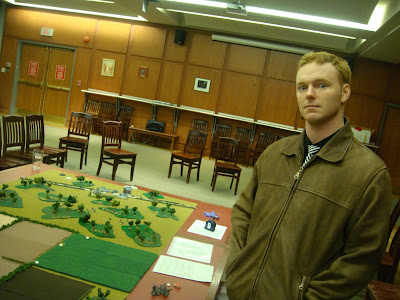 The main thrust of the American battlegroup came at the German left flank. 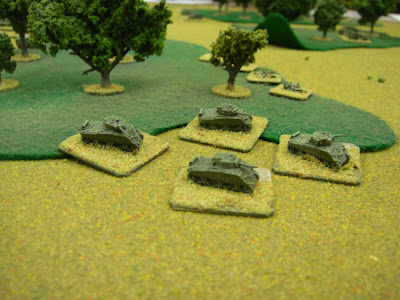 Two platoons of M4A1 Shermans with 75s and the platoon of M10 tank destroyers advanced on the three panzer IVs supported by a single Stug. 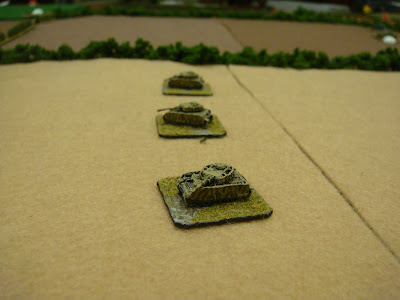 The American tank force, with its infantry support lagging behind in the woods, plowed through the bocage at the fields edge to be met by German steel. Unfortunately for the Germans, the steel felt more like feathers with only one hit on an M10, resulting in a kill. Three panzer IV crews and a Stug crew had a 25% accuracy rate on Shermans barely 450 meters away; Wittmann would be disappointed. The ensuing firefight bore witness to continued poor German marksmanship with only a single kill and only a couple of stunned crews for the loss of all four Panzer IVs and the Stug. 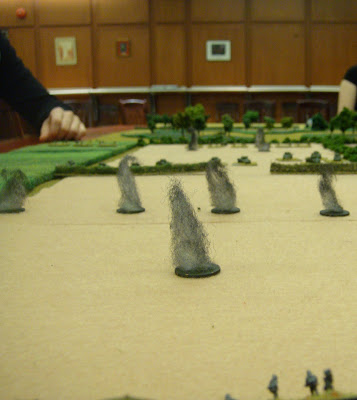 The American tank thrust took advantage of this victory and continued down the field in the hopes of exploiting this now extremely vulnerable flank. 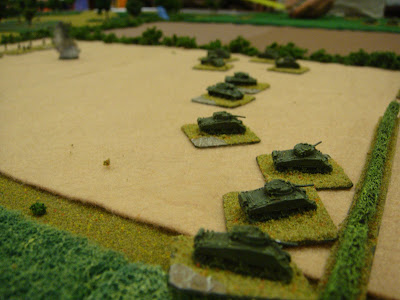 However not all was to continue well for this thrust. The German commander seeing his now very vulnerable left flank made a desperate move in committing his three panthers to the fray. This move was bold because by this point the American tank force had had the time to consolidate its position and was waiting for the pouncing cats. As the Panthers broke through the bocage into the field the opposing tank force opened up at them at less than 250 meters. This is what many wargamers call the tipping point; that event in a game in which victory or defeat swings. If the Panthers succumbed to the fire the game would be sealed; if the panthers survived to fight on the game was still up for grabs. Luckily for the German commander the fates smiled on the brave tank crews and the panthers survived the barrage of no less then 10 enemy tanks with only dents and a few headaches. Now that the fight was still on for his left flank, the German commander decided to commit the Tiger to this flank as well. 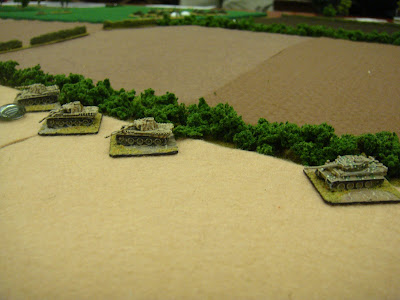 The sight of the Tiger bursting through the bocage along with the apparent invulnerability of the Panthers sullied the spirits of the American tank crews as they took steady losses to the Germans over the next 60 seconds (1 turn = 1 minute). The next 2 turns saw the American tank thrust torn to shreds by accurate German gunnery. The moment did seem particularly tense when early in the gunfight a shot from an M10 rang true and the Tiger crew was forced to bail out of its tank. In the end the three Panthers stood their ground and routed or destroyed their opponents. 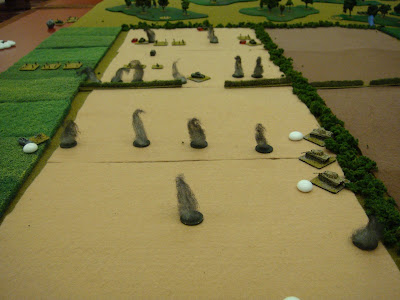 The left flank was now secure but the Americans were not finished as they now threatened the right flank. Advancing here was a platoon of Shermans with 75s and a platoon with 76s along with two platoons of infantry. Earlier the supporting MG teams for this force were annihilated by a hail of lead from the wirbelwind. This force came out of a dense field into the open to face one Stug, one Pak 40, one MG42 team, and a command Panzer IV. These lone elements were joined by the wirbelwind a few seconds later. In the ensuing firefight the Stug was knocked out and the pak 40 and Panzer IV were stunned or suppressed atleast twice each. While this firefight did take longer than the left flank eventually the American force had had enough and backed into the dense field once again, leaving behind 4 burning tank hulls and a platoon of infantry dead or running. 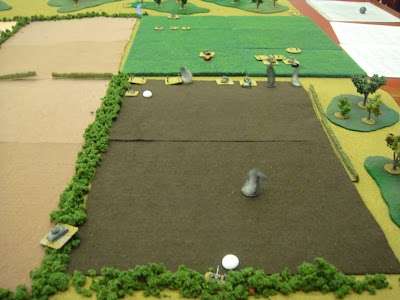 While this flank was not as clear cut as the other it was at this point that the American player decided to throw in the towel. 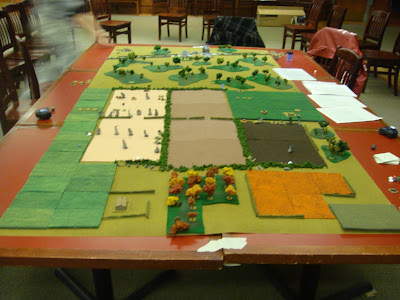 At the end of the game the Germans had sustained the loss of 2/3rds of their infantry, three Panzer IVs, both Stugs, the Tiger, one Pak 40 and one MG42 team. The remaining force lacked much of its original firepower but remained on the field to threaten the flank of the advancing American division and thus was granted victory. The American force sustained the loss of 4 platoons of infantry, various MG and bazooka teams, the forward observer (who never one called the artillery), and close to 3/4 of its armour including all the M10s. These losses were caused by a stiff defence on the part of the Germans and terrible gunnery on the part of the American tank crews. This scenario goes to show that the presence of but a single Tiger is enough to frighten both the 6mm and 6ft men alike, even if its actual effect is far less than imagined. Overall both players enjoyed the game immensely over the four hours it took to play. The rule set that we used (tentatively titled Fireteam), I have been working on for some months now and is in the final stages of polishing. We will play again soon and I will post the results of that battle as well. For my next project I need to finish the rest of the Americans and then move on to Russians. 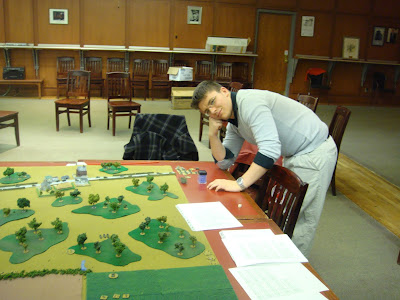 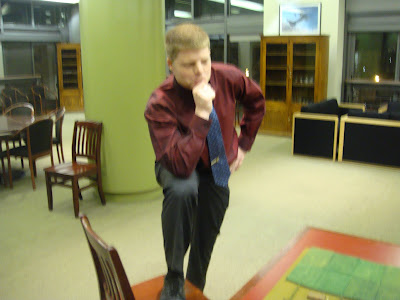