Skip to main content
Labels
Posted by Man For All Seasons January 31, 2010

I hosted another game of 6mm WWII last night in the RMC mess. This time it was an advertised open participation game for the whole wargaming club. I am starting to host more of these now seeing as I am the president and all. The game was well received by the attending players and spectators. Quite a crowd was in attendance for some time in fact showing the power of Facebook groups. The game involved 2 German players and 3 American players in a meeting engagement in and around a small river. Both forces were deployed along a road and bumped into each other with their advance units and then jockeyed for position. The game lasted a total of 7 turns (7 minutes in game) and saw wanton destruction on both sides. The Germans clearly won the opening moments of the game with some devastating fire from some panthers and later by some marder IIs. However, the Americans denied the Germans total victory when their mass was felt and the Germans were forced to abandon their initial positions and fall back across the river. The end of the game saw mounting losses on the German armor, American infantry across the river and a strike of 105mm American howitzers still landing on the German positions. Notable moments were when 4 panthers and a tiger opened fire on a group of shermans at over 1000 meters and scored 4 kills with 5 shots. Next were the gallant actions of the German recce force which stood up to a horde of American infantry and tank destroyers with very little losses until the artillery strike. Finally was a massed American infantry assault out of a field and across the river into some defending German infantry and assault guns including two Brummbars. This assault was very quickly cut down at less than 150 meters. By the end of the game the Germans had inflicted heavy losses on the Americans but were in no shape themselves to exploit it. Overall a rather enjoyable and sociable game that I would be happy to repeat. 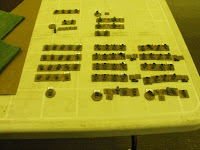 The American Force: Two Infantry Companies, One Tank Company, One Engineer Company, One Platoon of M18s plus Battalion assets. 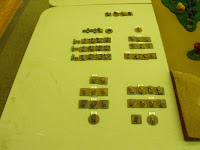 The German Force: One Company of Infantry, One Understrength Tank Company, One Assault Gun Company plus Battalion Assets. 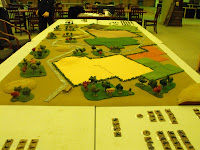 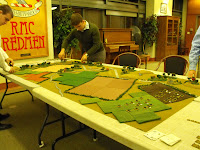 The Germans deploy their forces. 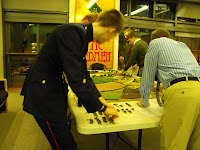 The Americans deploy their forces. 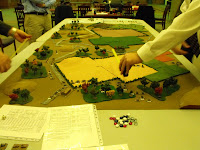 The Germans advance to their initial positions. 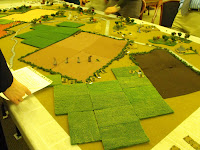 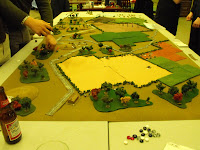 The Germans race for the bridge. 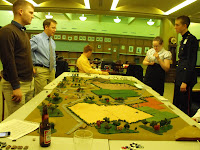 The American commander soothes his losses with another drink. 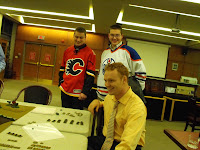 The game proves so interesting even the hockey fans were drawn in, though considering their respective teams its not surprising. 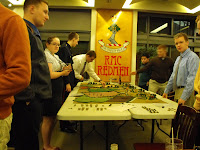 By the midpoint of the battle, quite a crowd had developed. 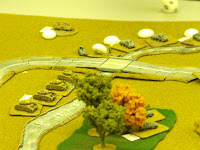 The Germans had the bridge well defended. 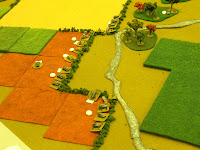 The Germans dug in their infantry and assault guns awaiting an attack on their right flank. 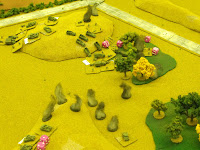 American losses near the bridge begin to mount. 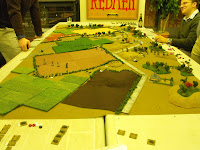 The Germans seem quite pleased with their performance. 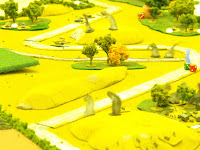 However, the American mass is finally felt and the Germans are forced from the bridge. 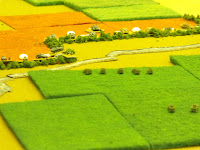 The Americans prepare for an attack on the German right flank. 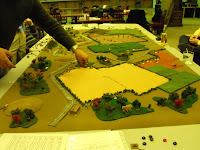 Near the end of the battle the ground was littered with burning hulks and countless bodies. 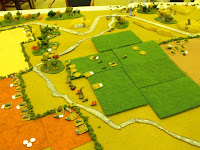 The final scene of destruction. 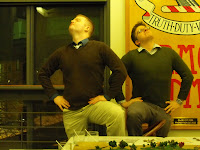 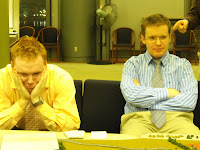