Skip to main content
Labels
Posted by Man For All Seasons January 28, 2010

In the midst of re-organizing and assessing battle damage to my modern micro collection I decided it would be a good idea to take photos of the horde. The following pictures show my British, American, German and Soviet forces, mostly tailored to the 80's. Barrels are bent, flocking worn away and paint chipped on these figures as the purpose of my assessment was to make note of what needs to be repaired. I have many more painted figures that simply need to be based and even more that need to be assembled/painted. I proscribe to the gaming rule of no lead = death. In simplistic form this rule states that there is an inverse relationship of the amount of unpainted figures a gamer owns (expressed in kg) and the probability that he will die at any moment (expressed as a percentage chance). This is expressed as a ratio of the weight of the figures (kg) to the age of the gamer (years). For a low probability of death a gamer needs to maintain a 1:1 ratio or higher; however, as the ratio dips below 1:1 the likelihood of death skyrockets. This also means that as a gamer ages he must expect to accumulate more unpainted figures to stave off his doom.

With the advent of plastic and resin in the hobby over the last two decades an alternate formula is required. The modern gamer must calculate his unpainted masses as an expression of the Figure Unit, greek letter Kappa (K). The K value of a particular figure is based on its weight, its base material, and the number of years since its retail purchase. To calculate a figures K value the gamer must take the figures weight and multiply it by a factor determined by its base material. For lead the factor is 1, for plastic the factor is 4, and for resin the factor is 5. The gamer multiplies the figures weight by the appropriate factor and then divides this by the number of years since retail purchase with a minimum value of 0.5. This will result in the the K value of the figure or group of figures. To determine the probability of death the gamers age is divided by the K value. The probability of a gamers impending doom is the age over the K value multiplied by 0.0001 and expressed as a percentage. If a gamer maintains a K value equal to this age then the probability of death will be 0.0001% at any given moment. As the gamer ages he will need to maintain a larger and larger K value. Additionally the K value will fall the older the figures are in a gamers unpainted pile. Thus the gamer least likely to die is one who consistently purchases new figures to both increase the size of his collection and to maintain its youth. Now try and use this to convince the women in your life. 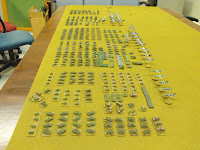 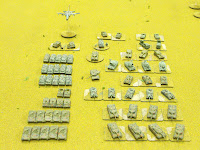 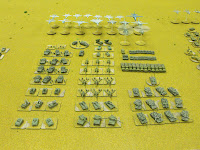 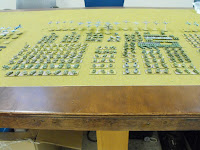 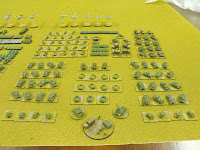