Skip to main content
Labels
Posted by Man For All Seasons January 20, 2010

This project I am adding to my list has come after inspiration from a fellow blogger's efforts. Dave Hoyt (the names are a cosmic coincidence) has been posting on his blog for quite some time now. I have drawn from my following of his work a desire to document the tests and triumphs of my own gaming efforts. In addition the atmosphere in which these efforts occur, the Royal Military College of Kingston, Ontario, adds a sometimes humorous, sometimes ridiculous, sometimes frustrating perspective on this ever so strange hobby of ours. While as a mid-twenties man with obligations to no wife or children, and therefore little understanding of the difficulties many in this hobby experience, I believe that the unique conditions of my unique occupation provide difficulties and amusements all their own that some readers may find of interest. 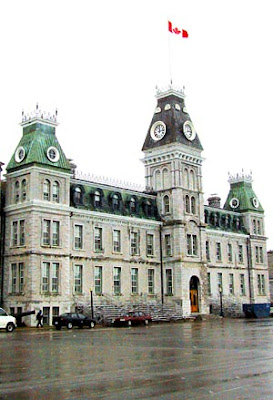 I do not believe that adherence to the self centered nature of many blogs is of much use in a description of gaming affairs and as such I will proceed directly into my first blog post.

For background purposes I must describe my primary gaming subject. For the past several years I have been enthralled with the one true scale of 6mm (argument from certain parties on this subject is both inevitable and futile). My collection of post WWII figures is exhaustive and considered by a few to be entirely ridiculous. The one element missing from this collection, however, remains WWII. I have been collecting bits and pieces for this period for quite some time from various sources. As usual with my projects, my ambitions for this period are not small. I intend to do early, mid, and late war in both the African and European (West and East) theaters. Until recently I was without a key component of this project. I have possessed an extensive set of German figures for all periods and theaters, yet, my allied armies (primarily Russian and US) have been without infantry. Recently my father purchased for my birthday a specific list of Russian and US infantry packs. He managed this not just because he himself is a wargamer but because he asked me specifically what I wanted from GHQ as a gift; to which I responded with specific stock numbers. This is a lesson for wives, sisters and mothers across the hobby. I do not mention gaming husbands as I have never encountered the phenomenon of inaccurate gift giving in the other direction.

My efforts as of late have focused on readying my American force. It is my hope to have them finished in time for a game this Saturday night in the RMC mess. Gaming in the mess, with the bar only 20ft away, is a sort of habit amongst certain members of the RMC wargaming club (specifically those with alcoholic tendencies). The German adversaries for this American force have been completed for several months and I will provide pictures of them at least during the game on Saturday. Both of these forces are designed to be played in either a 1:3 platoon scale game or recently in a 1:1 section scale game. The completion of this force will allow me to begin my duties as the soon to be appointed (completely dictatorially) president of the RMC wargaming club; budgets, yay! 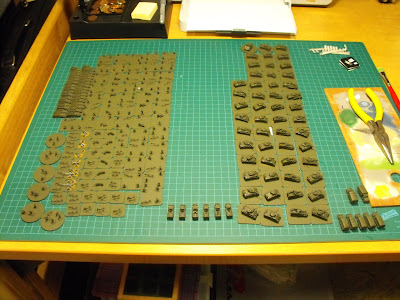 The entirety of the force in 1:1 is a full infantry battalion with enough support elements to fulfill any light Colonel's wet dream. The armor attachment includes Shermans with the 75 and the long 76 as well as tank destroyers and various support halftracks. 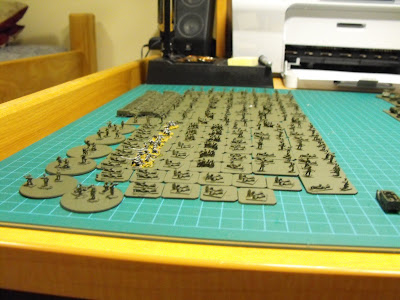 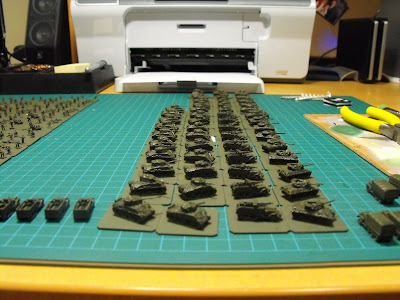