Skip to main content
Labels
Posted by Man For All Seasons January 29, 2010

The Quick and The Lead

I played a rather amusing game of cowboys with my brother last night in the RMC wargaming club room. Daniel had been interested in experimenting with a card based initiative system for his cowboys. It was not that Legends of the Old West were not satisfactory as a rule set, merely that they lacked a certain hollywood flavor. With a little back and forth we combined our intellects and came up with a rather fun way of playing LoOW with cards. While working on this we barbecued some sausages on my brothers barbecue while it was a blustery -20 outside. The game proved to be quite a hoot. My personal favorite moment came at the end of the game when the He's Not Dead card came up. On this card the last knocked out hero stands up with 1 wound remaining and a new turn begins. With this card my deputy, I was lawmen, got back up not 4 inches from a group of Daniel's bandidos. The next turn saw the deputy get one of his cards before the bandidos and unload a sawed off shotgun into the group knocking out 2 of the 3 bandidos. This singular hollywood moment effectively ended the game in a fashion agreeable to both players. All in all I believe that Daniel has struck on something unique and simple that I would easily play again. 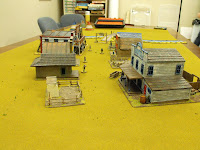 An overview of the town. 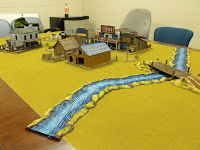 A view from the river side. 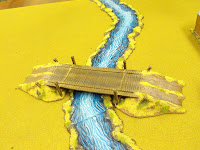 Daniel just finished this bridge and touching up this river with dull coat and flocking. 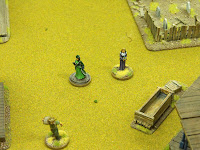 Daniel also just finished a number of civilians including these two ladies. 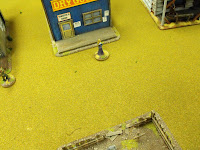 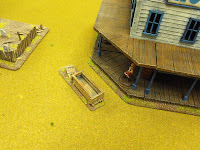 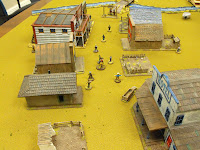 The lawmen race down the town. 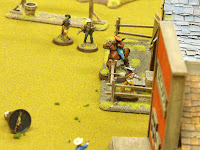