Skip to main content
Labels
Posted by Man For All Seasons January 26, 2010

The Best of Both Worlds

Well in the aftermath of this past weekends WWII game I have decided to post a preliminary report on another project I am working on. While I enjoy historical and modern periods of gaming, the period of science fiction starship gaming will always hold a place in my wargaming heart. My first wargame was French and Indian War (7 Years War for those with a European perspective) on the dining room table but the first figures I ever owned were starships. I distinctly remember as a wee lad sitting on the couch with my father in a time honored ritual of eating spaghetti and watching Star Trek the Next Generation on numerous occasions, when it first aired too. This love has continued to this day.

When I left for RMC nearly two years ago I gifted most of my extensive (as all my projects end up) starship collection to my friends and fellow gamers. Recently, mostly since the latest star trek movie came out, I have been hit with the bug to play with starships again. I find that the period, miniatures, terrain (haha) all provide a useful and distinct distraction from the painting of hordes of 6mm tanks and infantry. As such, this Christmas I commissioned my friend Stephen Thomson to cast up a series of star trek models that he sells. These starships have been collected, horded, scratch built and nearly stolen over the years to create a near complete line of 1/7000th models of the major powers of star trek. For those unfamiliar with the difficulties of this endeavor I must explain. Most models of star trek ships come from micro machines or other toy manufacturers including a few plastic model kit makers. The plastic kits are for obvious scale reasons not suitable. Other manufacturers like micro machines make their models only to the scale of the packaging. Thus an attempt to keep a consistent scale is a frustrating and nearly futile endeavor. I liken this attempt to many historical gamers attempts at realistic rules and or paint schemes (Que inevitable argument).

Thankfully Steve is as stubborn as any DBx player and has successfully acquired many models in scale. He does sell these models to any who might be interested, and if so I would suggest contacting him via his email (crucible_orc@hotmail.com).

As it stands I have not proceeded to the painting stage of the project but have cleaned and assembled all the models. At the moment I await a shipment of flight stands from Litko. These stands are desirable both for their cost and variability but also for their hexagonal nature. These hex bases lend themselves well to Full Thrust, the rule set my comrades and I intend to use for these miniatures. As soon as I get these stands I suspect the fleets will be finished in due time and a battle report will soon follow. The fleets I have purchased are a composite Federation fleet, a Klingon fleet and the beginnings of a Dominion fleet. The remainder of the Dominion fleet are to come from a gentleman who has custom built the larger capital ships and has them available via Starship Combat News in the orbital shipyards section of the message boards. With the addition of Cardassians from Studio Bergstrom I will have 4 of the 6 major powers that participated in the Dominion War. 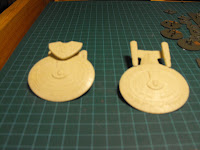 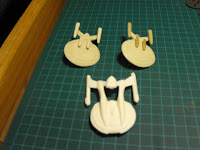 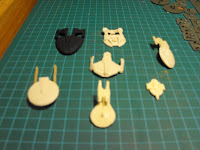 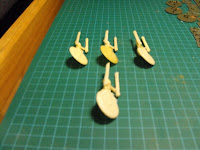 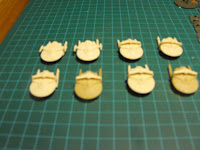 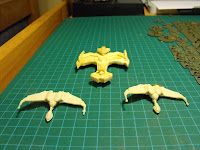 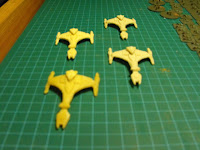 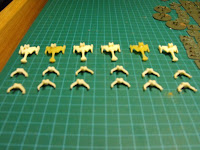